This Butterfly Valve Has a Triple Offset

Today, triple-offset butterfly valves offer a variety of advantages to the industry and have recently gained recognition for their ability to control pollution. The valve industry looked for more innovative ways to combat this global challenge of emissions, and triple eccentric butterfly valves were recently considered by valve manufacturers. With their new and updated features, Triple offset butterfly valves are used in ways that have never been done before, while still being cost-effective.

What is Triple Offset Butterfly Valve?

Triple offset butterfly valves (TOVs) come in three different offsets.  A cone-like shape is created by two offsets at the center and a third offset on the sealing surface. A triple offset valve is used when a bubble-tight seal is needed, the system is under high temperatures, and zero leakage is required.

A first offset is provided to the central axis of the sealing surface where the disc rotates 360 degrees around the middle axis to provide sealing by deforming the soft seal.

In the second offset, the shaft is positioned about the bore's centerline. While operating, it produces a cam action to lift the seat away from the seal, resulting in friction during the first 10 degrees of opening and closing.

The third offset is based on the geometry of the closing elements. Each sealing element is machined into a conical offset profile to create a right-angled cone. Therefore, friction-free stroking is guaranteed throughout the entire working cycle. When the disc seat is closed, a 90° angle serves as a mechanical stop to prevent it from over traveling.

A valve with these three offsets provides continuous sealing surfaces, shows minimal wear between sealing surfaces, and provides durable sealing throughout its lifespan. By optimizing the seating angle, the disk is less likely to stick and bind, and there is less torque required to operate the disk.

Based on the connection there are different types of Triple offset butterfly valves.

Wafer Type: Wafer type triple offset butterfly valves are designed to maintain tight seals, protect against bi-directional pressure differentials, and prevent backflow in uni-directional flow devices. As a result, a tightly fitted cap such as an O-ring or gasket, which has been precisely machined, along with a smooth valve face downstream and upstream, accomplishes this. 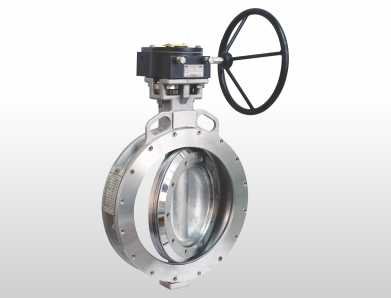 Lug Type: This triple offset butterfly valve configuration is similar to that of a three-piece ball valve, in which one end of the pipeline can be replaced without affecting the other end. Using threaded inserts, flanges, and bolts that do not require nuts, each flange has its own bolt. Inspecting, cleaning, repairing, or replacing a lug butterfly valve does not require shutting down the entire device.

Flanged End Type: Flanged end eccentric butterfly valves have flanges at both ends for connecting to pipe flanges. An end connection like this is used for butterfly valves that have a very large size.

A triple offset butterfly valve doesn't work like a traditional butterfly valve, which turns sideways to allow media to pass, like hand waving. Triple offset valves operate like globe valves, where the disk moves up and down like a cone.

During the transition from a cone to a circle, there is a strong seal. Since the disk is angled concerning the surface, there is no drag when the seat contacts the disk.

Some processes do not lend themselves well to conventional butterfly valves, such as those containing harsh chemicals or containing small particles that can clog valves and pipes. With Triple Offset Technology, the metal seal elements will never come in contact until their final degrees of closing thanks to cam action and right-angled conical sealing.

With metal-to-metal sealing, no leakage occurs due to a bubble-tight seal.

With friction-free stroking, the valve can be operated with low torque and for a longer period.

Because there are no cavities between the sealing elements, clogging is prevented, which results in low maintenance and long valve life.